When Lori and I first got together, I warned her that I’d drag her out to Cathedral Range and make her climb Sugarloaf Peak with me one day.

“You have to come with me,” I reasoned. “It’s pretty much my favourite place on earth.”

She agreed without too much contemplation, I guess choosing not to dwell on a challenge that lay so far ahead.

It was nearly two years before the right opportunity arose to make good on my pledge. By this time Lori had moved herself and the kidlets to Melbourne and we were all living together, but the kids were headed to Sydney for school holidays with their grandparents.

Lori had dived head first into a new hobby by this time too, obsessively logging geocaches at every opportunity. I’d been secretly shopping for an engagement ring for a while, and racking my brain for the right way to propose. When the idea came to me to combine my favourite place in the world with Lori’s new favourite pastime, I knew I was onto something.

She wasn’t too resistant when I started to plant ideas in her head about the hike, so the planning kicked into action and I ordered a ring. Eventually, I sealed the deal by telling her that there was a geocache not too far from Sugarloaf Peak. She was in. I just needed to do one more thing – hide something in the geocache. Obviously hiding the ring was out of the question, so I made a proposal message (laminated, because geocaches aren’t always waterproof) and planned a secret trip to Cathedral Range State Park. 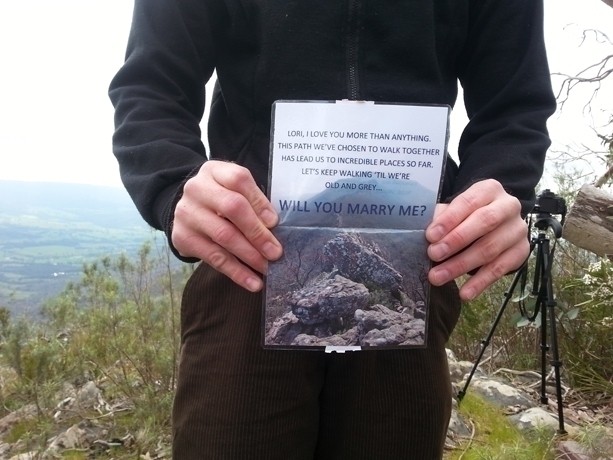 (I know, I know… There’s a spelling mistake. How embarrassing.)

Two days before the big day, I dropped Lori off at work and told her I was on my way to the Dandenongs for a hike (hey, I didn’t want to lie any more than I had to). Two hours later I was racing up Sugarloaf Peak, watching a huge storm roll slowly towards me from the south. By the time I reached the summit, the wind was so fierce that it made continuing tricky. I had just located the geocache and hidden my message when it started to rain. Having never descended Sugarloaf Peak before (I’d normally continue the circuit), I was nervous enough already about the prospect of hurting myself, so I made my way back to the descent as quickly as I could, and was lucky to make it down the steepest section before it got too slippery.

I was a bit over halfway back to the car when my phone rang. It was Lori checking to make sure I was okay after the storm (which had obviously hit Melbourne much earlier). I managed to fumble my way through that conversation, obviously hiding the truth just well enough for her not to notice, and made it back to my car (and then home) in one piece. My plan had worked. Now I just needed to make sure we made it back there together.

When the day came, we had a very long and quiet drive. There was so much that could go wrong. I wasn’t sure how much Lori would struggle with the climb, and another storm was looming. I reassured her along the way that we could turn back at any time and it wasn’t a big deal if we didn’t do it today, knowing full well how shattered I’d be if all my planning went to waste. She remained upbeat, as she always does, despite probably being pretty unsure about the whole thing herself.

My intention the whole time had been to film the proposal, and I’d filmed my ascent two days earlier. I told Lori that we were making a geocaching video for the blog, and she was hosting. Unfortunately, the video turned into a complete disaster, but I won’t go into that here. Let’s just say there’s a reason you don’t see too many videos on Bushwalking Blog. Fail.

Anyways, the rest of our story will be told mostly in GIF form. At least I managed to do something with that footage.

As I mentioned, it wasn’t the nicest day.

But Lori warmed up quickly once the climbing started.

She was struggling along, but by the halfway mark, I could see she was already proud of herself. Generally, once you give Lori a challenge, she doesn’t give up easily.

By the time we reached the summit she was beaming, so proud of herself that she forgot how to form sentences.

We enjoyed the summit for a while before continuing down Razorback Track for about 500 metres to Ground Zero (geocaching speak for the place where the cache is hidden). I pretended to look for the cache where I knew it wasn’t, allowing Lori to find it pretty quickly. She brought it over to me to open and when she cracked the lid, I watched her face change with complete and utter confusion as she saw this…

She pointed at it, stammering “but that’s my…” and continued looking desperately confused.

I waited a few seconds before blurting out “open it!” She did, and I watched her read the message, some small signs of comprehension starting to appear on her face.

I got down on one knee and presented the ring. I said a few words but I didn’t plan them and, as such, I don’t remember what they were now. I do know they ended with “Will you marry me?”

Putting the ring on her finger, I watched her try to process what as going on for what seemed like an eternity.

“So that’s a yes?” I interrupted, laughing nervously.

For the first time ever my Lori was lost for words, but she did manage a very big nod.

We embraced like only two newly engaged people can and then, eventually, she managed to speak actual full words and sentences again. Mostly to interrogate me on how I’d managed to pull this whole thing off without her having any idea whatsoever. I couldn’t believe I’d done it. I was stoked.

We stayed up there for another half hour, chattering excitedly about the whole amazing day, and then floated back down the mountain with ease. It was time to head back to town and celebrate.

Got anything to say? Please let us know by commenting below. 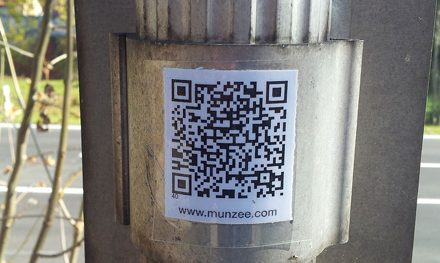 Fun with Munzee: Getting kids outdoors with a ’21st century scavenger hunt’

Say no to recreational hunting in NSW National Parks 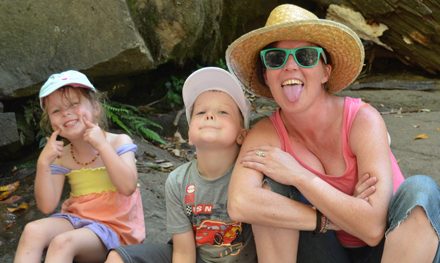