The Chop points his walking stick skywards at the plane that’s just taken off from the nearby airport runway and makes the shooting sound we’ve been hearing so much lately.

The Fairy Princess turns around suddenly. “There’s a T-rex behind us. Run!”

We all hold hands and run up the dirt track, both kids giggling the whole way.

This is the first time I’ve been bushwalking with the kids in ages for various reasons, one being that they’ve started to show more resistance to the idea lately. I don’t want to force them too often or make a big deal out of it. The last thing I want is to put them off it for good.
Today, I needed to go and take GPS readings for a geocache hide I’ve been working on (more on that later), so I decide not to mention ‘bushwalking’ or ‘hiking’ and just tell them that.

We’re at Woodlands Park, and entering the fenced-off conservation area through the double gate has sparked something in their little imaginations. Suddenly we’re in the abandoned Jurassic Park, from the movie of the same name. The walking sticks we’ve picked up along the way become guns and every piece of fallen bark becomes some kind of dinosaur killing bomb. So what else is there to do but play along?

It’s not long before I realise I’ve made an incredibly smart decision. I haven’t seen the kids enjoy a bushwalk this much in a very long time. This game continues throughout our walk. The rabbits we see bounding into the bush as we approach are warning of an approaching dinosaur. The kangaroos are some kind of harmless herbivore. My GPS eventually becomes a radar of some kind. Before we know it, I’ve found the spot I had in mind for the geocache, which is now being referred to as a dinosaur trap.

The kids surround me while I take my GPS readings, warding off dinosaurs with the various weapons nature has provided them. Soon we’re hurrying away back towards the car, taking a different route because we can see some other survivors (bushwalkers) heading toward safety on a track in the distance.

We’ve done a three-kilometre circuit by the time we return to the car, and the kids haven’t even noticed. While I think they’re pretty tuckered out and glad to be heading home, they haven’t mentioned wanting to leave. Not once.

As we’re chased back down Mickleham Road towards the city by various carnivorous creatures, I remember what I’ve told others is the golden rule of hiking with kids – make it fun. I’m proud that today I didn’t even have to do that – they did it for themselves.

How do you make hiking fun for your kids? Let us know by commenting below. 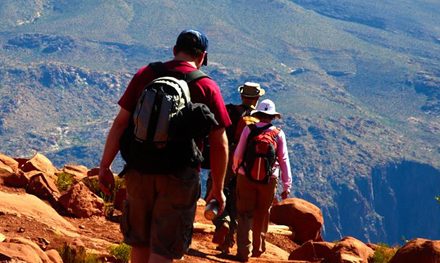 Are you a nature-loving couch potato? 6 Reasons to start hiking for a healthier you 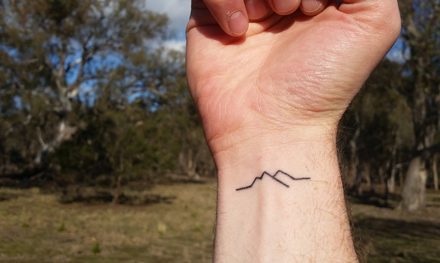 I got ink: My latest ode to the mountains