We had our eyes on this track for a number of months before walking it.

A workmate, hiking and MTB partner, and fellow coffee lover, David King, had planted the seeds back in February when we were on a mission to keep increasing the adventure level of our outings. He’d read reviews on the track (known for the infamous Vertical K race each year) and it seemed pretty gruelling.

“But just to add another level of adventure,” he’d suggested, “let’s wait until winter and do it in the snow”.

The lead up was filled with mapping routes on Strava to check out the elevation gain, discussing just how lightweight we could go. I even walked up The Scar at Mount Dandenong a couple times in the hope that its 400m gain would somewhat prepare me for keeping up with the ultra-marathon capable Kingy on this 1000m climb.

The crux of this walk for me was the goal to manually brew some fresh coffee above the snowline as a reward for our efforts getting up the mountain.

The weather leading up to the day was dismal. Massive amounts of rain and minimal snowfall. A week out and the forecast was looking more promising. Snow overnight most nights, but still a lot of rain coming. Reports all said there was a moderate amount of snow already at the summit which is what we were after. Then came the forecast on the day prior… A max of -2 at the summit with a wind chill of -13.

The adventure level just went up a notch. 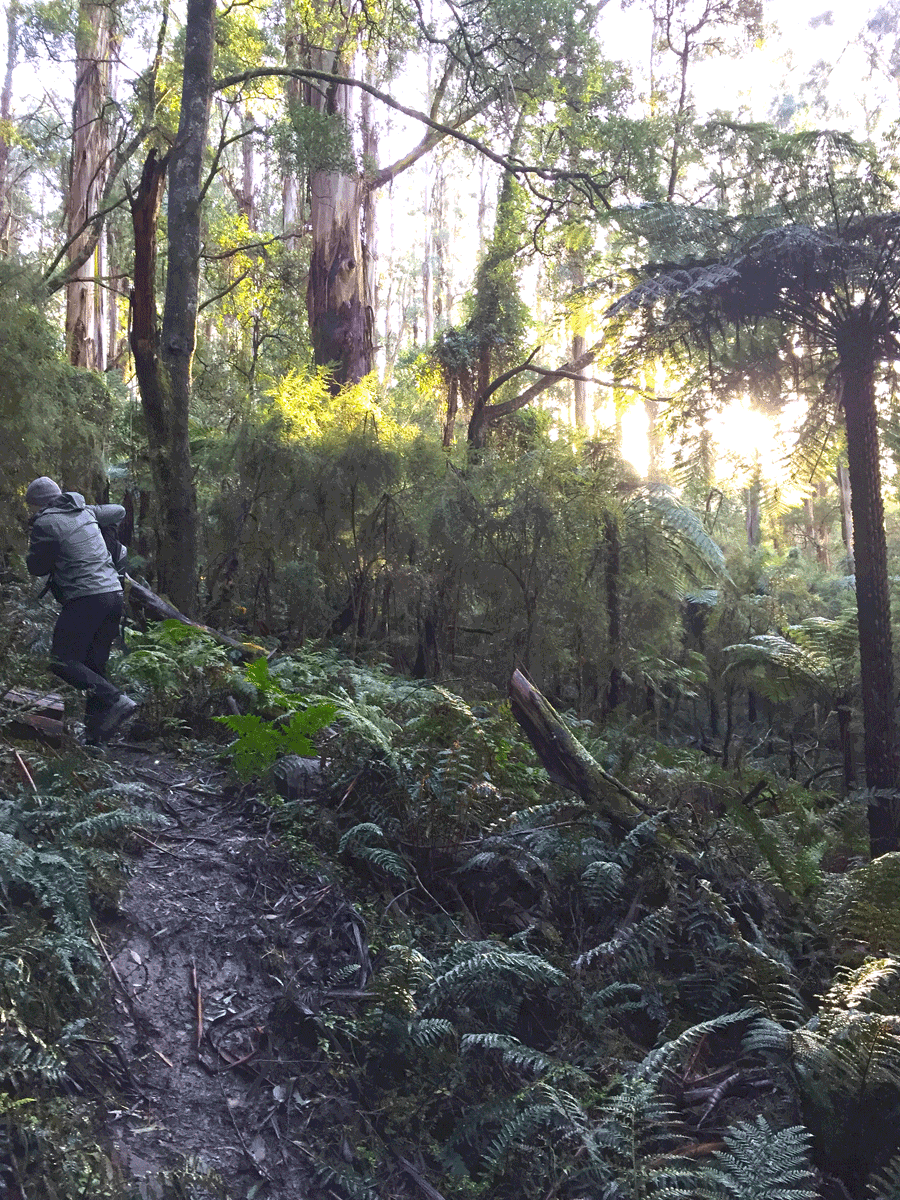 On the day of the walk, we drove out to Warburton in the patchy rain. Not ideal but we were committed regardless. The mood was set by playing Eddie Vedder’s “Into The Wild” soundtrack, which is funny because the “Into The Wild” guy never made it out alive.

My original thoughts were to start in the town of Warburton and go from there. That way we could conveniently finish at the bakery for a vanilla slice and blow all the hard work we’d just done. I’m very glad we didn’t in the end as this would have meant starting out walking Martyr Rd, which in itself is a massive effort. Short, but very, very steep. It would have set me behind from the start.

Instead, we parked at the end of Martyr Rd, where a sign clearly marks the start of the track. It stated 12km with a 7hr return which I can only assume doesn’t include the Mount Victoria detour we had planned. Our Strava estimates had come in at 16km.

Most reviews of the track take you up the initial climb, then when the track meets the main road at about the 4km point, you follow the road most of the way to the summit. We had opted to cross the road and take the track that cuts back to Mount Victoria then across to the Donna Buang summit, adding a few extra kilometres.

The first leg of the track leads briefly down into a fern gully before ascending along a fence line adjacent to private land. Even at this low elevation, the view is beautiful looking down into the town and across to Mount Little Joe.

After about 800m we crossed the O’Shannassy Aqueduct Trail before the real climb begins as you enter the National Park. The trail is well traversed and always easily visible. After all the rain in the past week, however, it was nothing but mud and incredibly slippery. The first couple of hundred metres are simple enough, as the track starts to climb into the mountain ash and tree fern forests. After a while, the grade increases steeper and steeper to the point where, in the muddy condition, it was very hard to keep our footing and we were frequently looking for something to grab onto to stop ourselves sliding backwards. Thankfully the drizzle had let up by this point.

Much of the next 3km was like this. As tough as it was, it was never unpleasant. And there were enough places not quite as steep to break it up and give some respite before the next steep pinch. The entire trail is single-track width. There are a few trees to climb over, but there is evidence that the trail gets maintained somewhat so I imagine they’re cleared regularly.

At around 4km, the track meets Donna Buang Rd. From here you can either follow the road for the remainder of the way or the gated fire trail to Mount Victoria. From here the walk is simple. To the summit of Mount Victoria is all well-maintained fire trail. Views are limited due to the density of the forest. 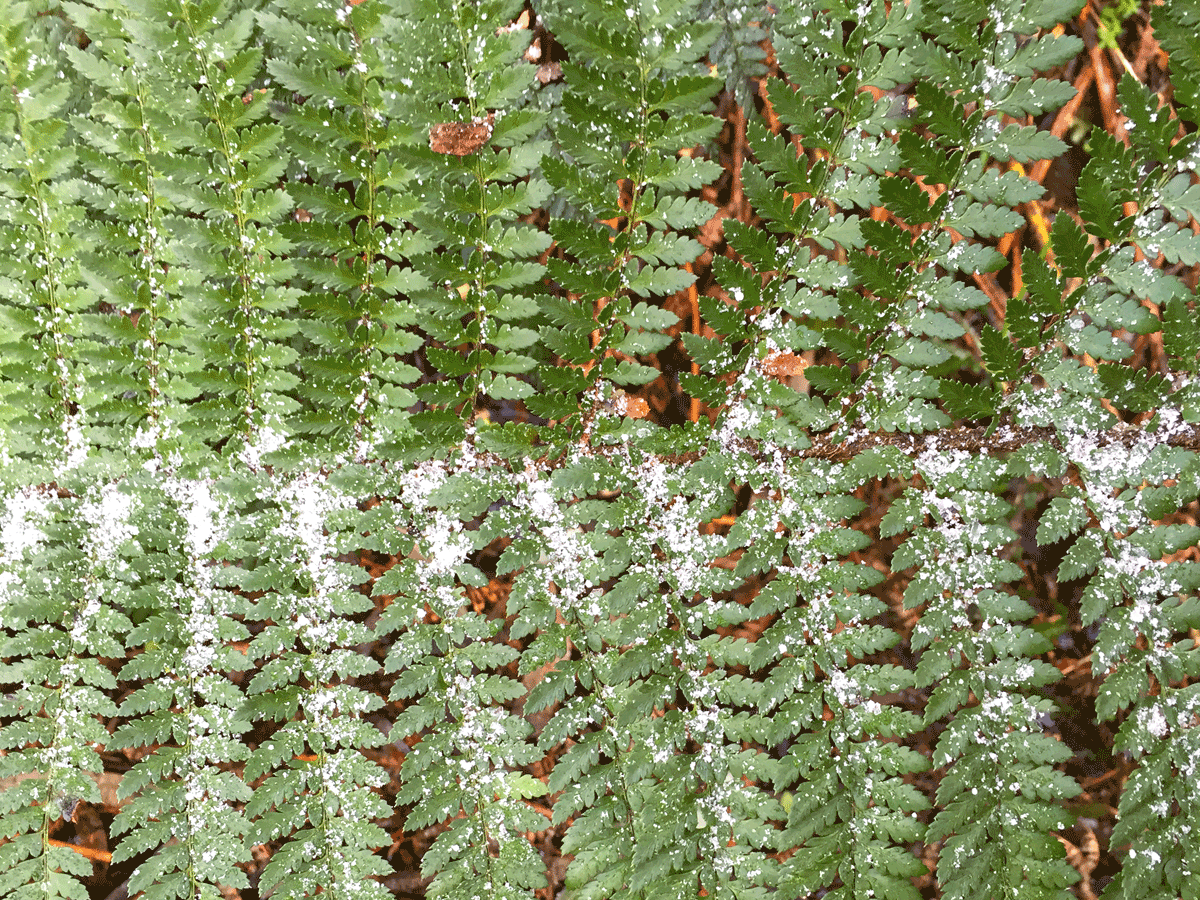 Up until Mount Victoria we had seen no snow. It wasn’t until this point, at 1100 metres, that we started noticing it settled on the fern fronds and becoming audible underfoot. The trail narrows considerably between Mount Victoria and the summit. There are places where the knee-high ferns almost cover the track. The ascent was gentle from here but even so, the amount of snow covering the ground increased steadily. The sun came out briefly on this track and gave a stunning visual experience of heightening the brilliant greens all around us and illuminating the snow falling. We tried capturing it on video but it didn’t do it justice. 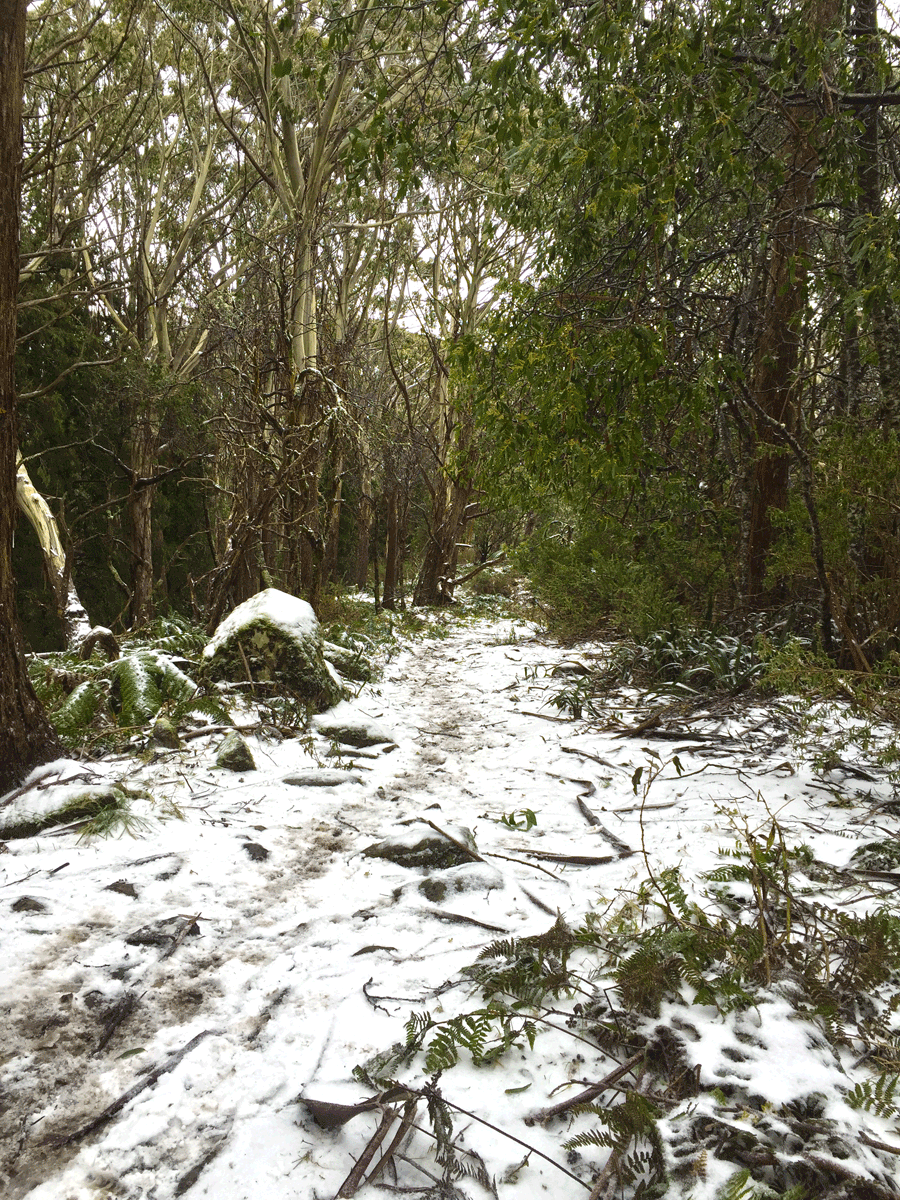 It’s 2.5km from the summit of Mount Victoria to Mount Donna Buang. There were only a few short steep sections, but nothing major. And the snow underfoot gave a good amount of traction. The trail between the peaks was very sloppy and had recently been cut up by what we initially thought was illegal dirt bike activity, but later realised due to the shallow tread indents in the snow that it was actually made by Fat Bikes. David remembered seeing that there was a guy that operated Fat Bike tours of the mountain which would be a sensational way to explore the snow. Maybe on a week with not so much rainfall to preserve the trails a little better. 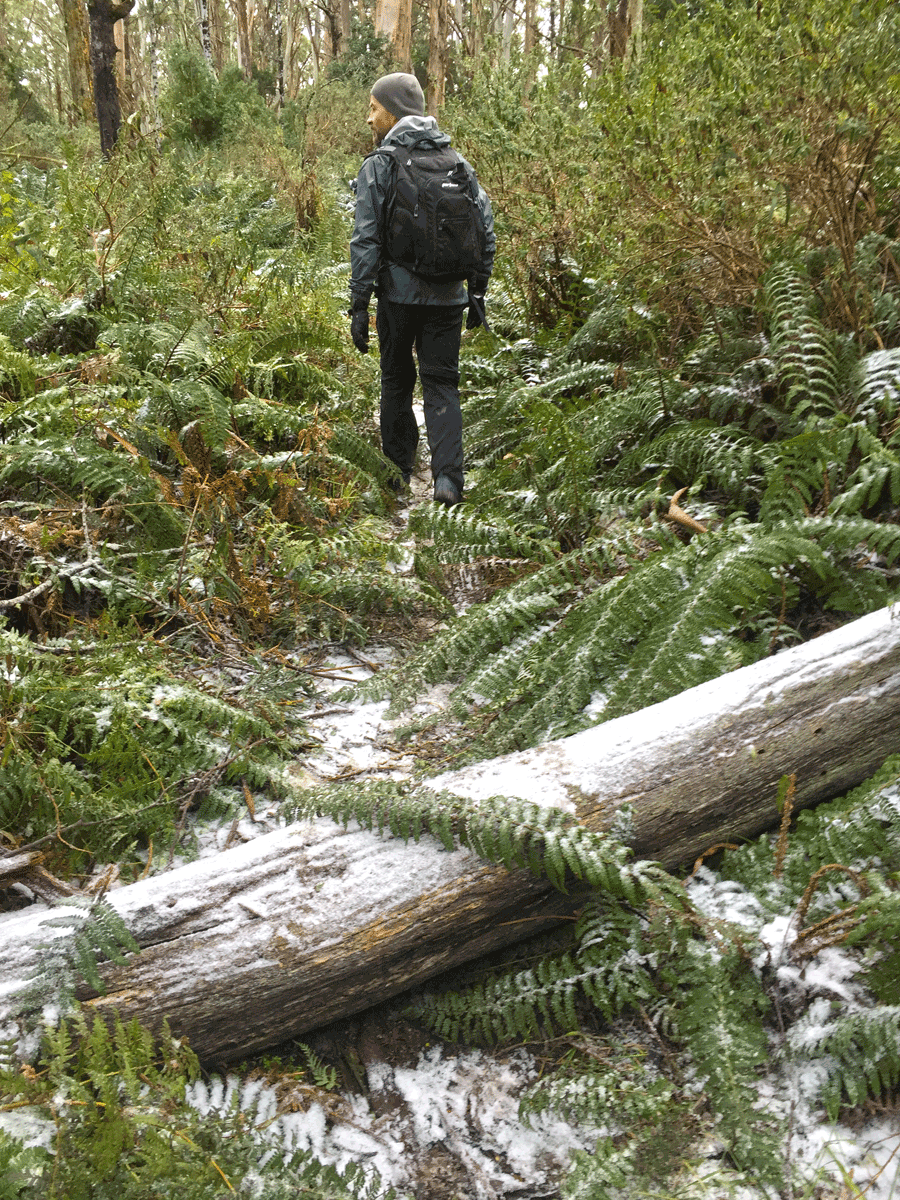 We reached the summit and it was a shock to the system. It was the first time on the walk we had felt the cold. Partly due to stopping, and partly from the wind. The summit is very exposed and the wind was bitter cold. -13 was no exaggeration. Having seen only one person along the trail up the mountain, here we found a couple of dozen people enjoying the snow. The weather really was perfect for it.

We climbed the lookout tower and were rewarded with beautiful views of the valley looking down towards Melbourne. The cloud would come and go from obscuring view, but for the most part, it was clear enough to appreciate the scenery. We could see heavier weather approaching and decided to start trekking back down before it hit. 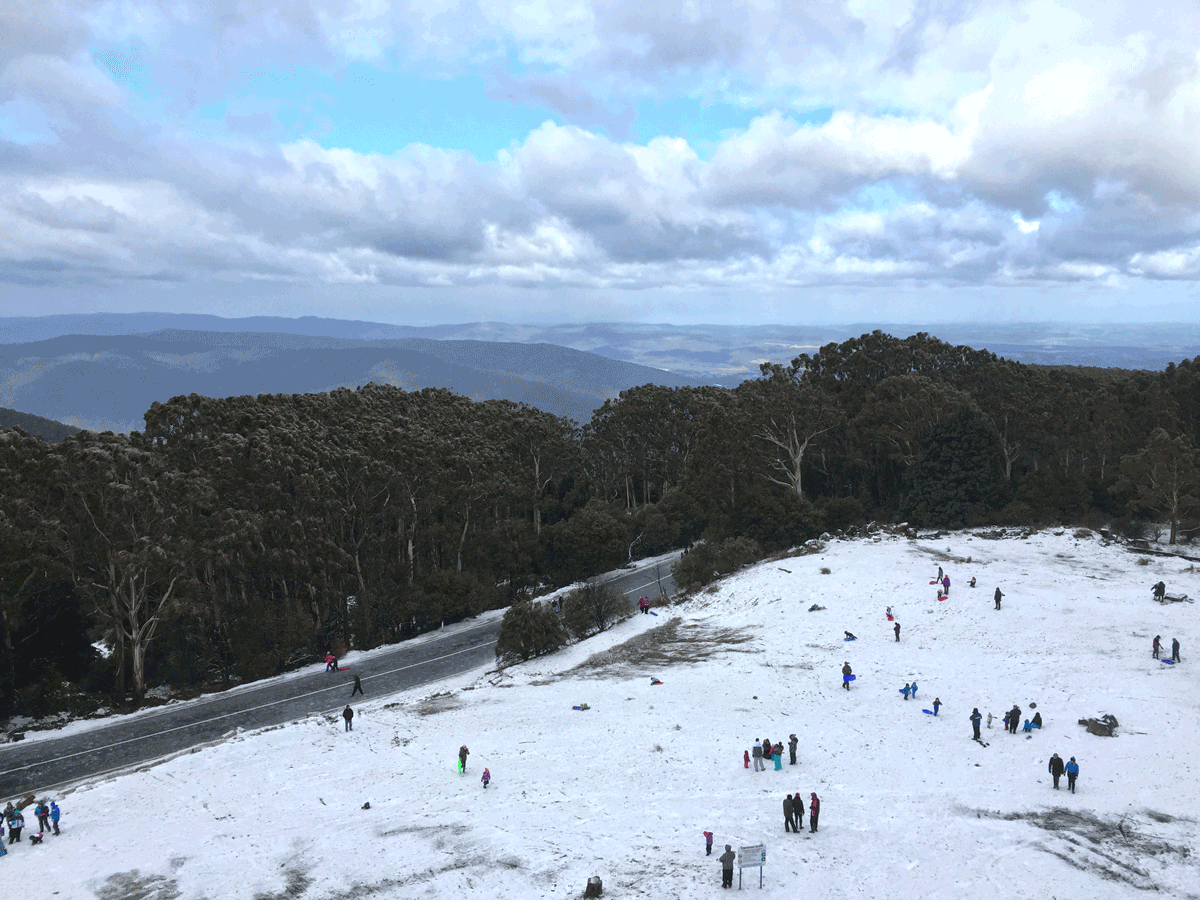 But not before a coffee. We headed back down the trail a little to get away from the crowds and out of the wind and found the perfect spot. While David did his best to knock his GoPro out of a tree by throwing snowballs at it, I set about brewing.

Specialty coffee started as a hobby of mine about 2 years ago and has since grown into a serious passion. If I could find a way to build a career out of it that would support my family, I’d jump at the chance. I love its focus on sustainability, direct trade with remote farmers, and the relationships it develops in the process. On a personal level, manually brewing a well roasted single origin coffee is a great experience to both brew and consume. Brewing outdoors in nature is the latest step in my specialty coffee journey, and this was my first time of brewing in the snow.

The brew method I’d chosen was the Aeropress. After accidently leaving mine at work, David came to the rescue on this trip and brought his along for me. The Aeropress is great as it is extremely portable and durable. Perfect to throw in a pack and not have to worry about it breaking. It makes a full-immersion brew (similar to a French Press) but is then forced through a very fine filter which leaves all the non-soluble particles behind resulting in a strong but clean cup. 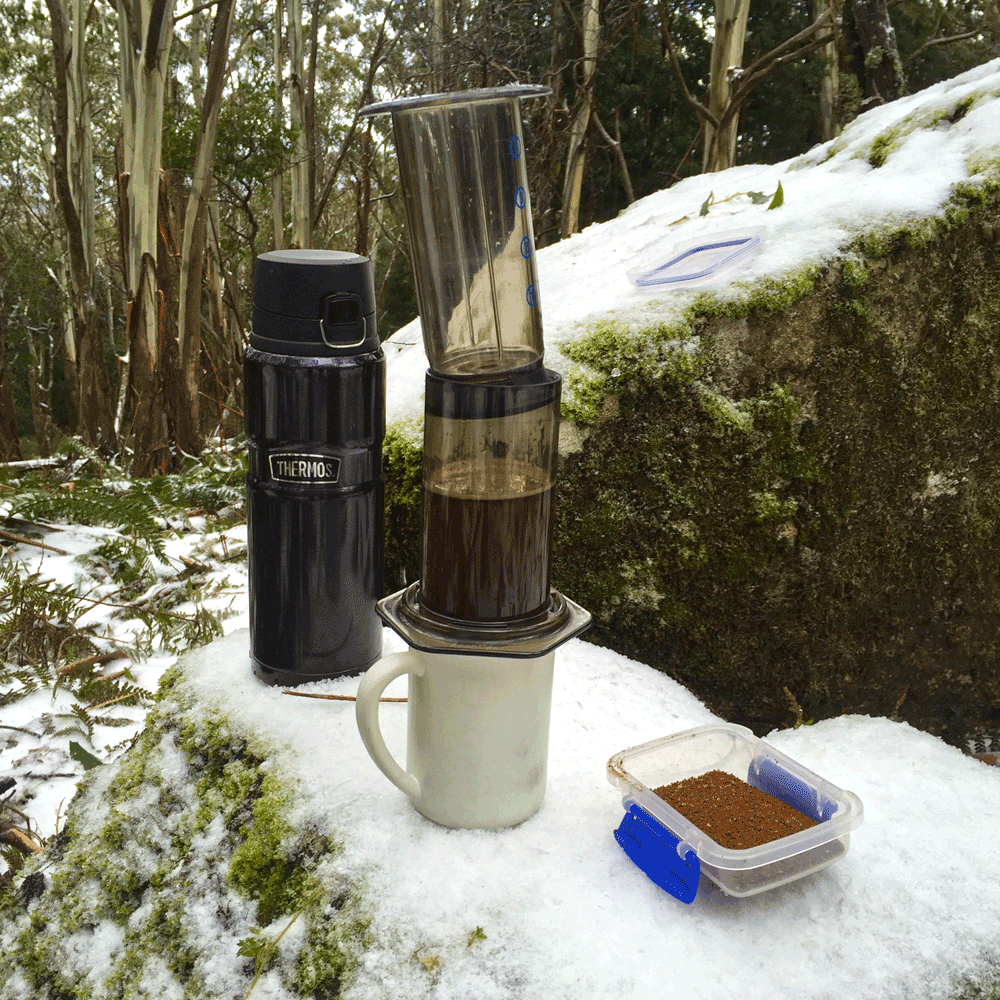 Normally to brew a quality cup you want to grind the beans within 15 minutes of brewing them to maintain freshness. I’d opted to leave the hand grinder at home to save space so had pre-ground the beans that morning. Some say you can taste a difference, but this still tasted delicious.

Rather than carrying the gear to boil water up there, I had filled a Thermos with boiling water before leaving and it was still the perfect temperature 4hrs later. Another advantage of the Aeropress in this instance is that it makes a great cup using water around 82 degrees, much lower than all other brew methods.

I had brought enough coffee for two cups, an awesome honey-processed Bourbon varietal grown in Burundi, roasted by Five Senses. No matter which method I’ve brewed this coffee on it always turns out amazing. This was no exception. The Aeropress brews a cup in under two minutes, which is great when you can’t feel your fingers anymore and just want a warm cup to wrap your hands around. All in all, brewing in the snow added to the whole experience of the day and was very satisfying and somewhat serene. 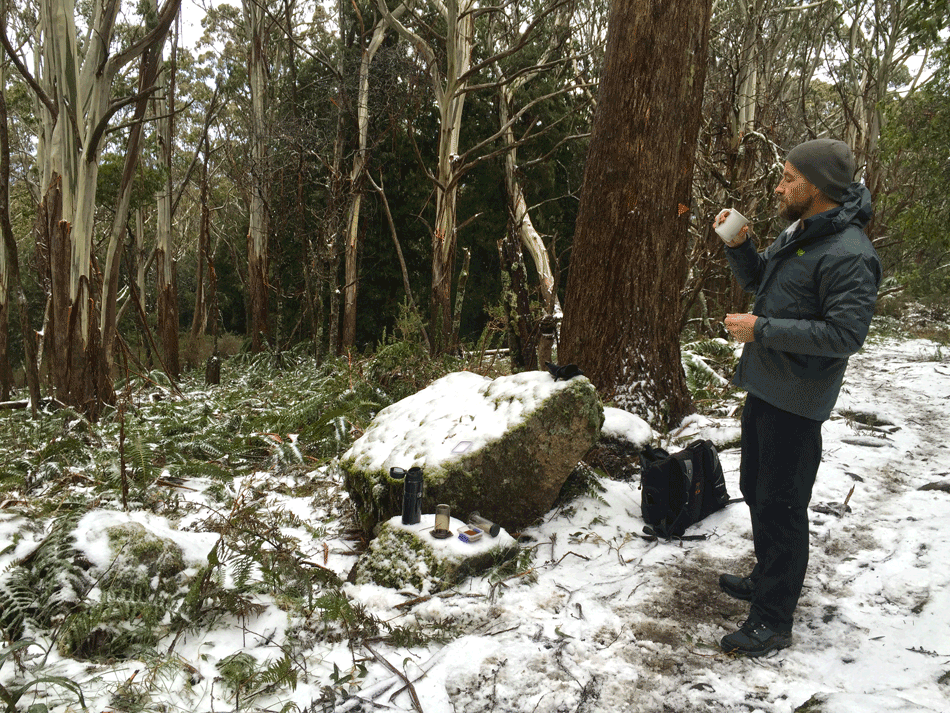 Heading back down the mountain on the same path was almost as strenuous as coming up. The steep section was very hard on the knees, especially trying to stabilise your footing in the mud. I think we both slipped over at least once and our boots were absolutely caked in mud by the time we returned to the car.

All up the walk took us about 6hrs. This took into account the multiple breaks heading up (for my benefit, not David’s), and the time spent at the top.

While the snow was a great experience, I imagine the walk would be just as great in summer, especially without the mud involved.

Have you walked Mount Donna Buang? Like to brew your coffee on the trail? If you have any stories, comments, updates or corrections, please let us know by commenting below. 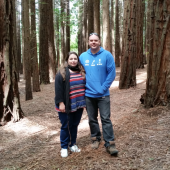 Tim is a hiker and mountain biker with a passion for specialty coffee and for enjoying it in the wilderness. He brews coffee anywhere and everywhere, whether practical or impractical, and he documents his passions on his website, Bike Hike Brew, and also his Instagram account. 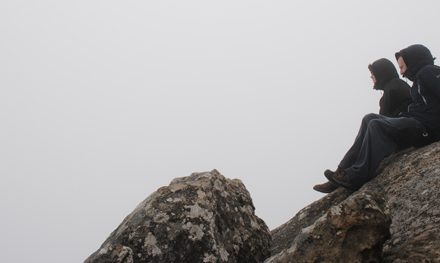 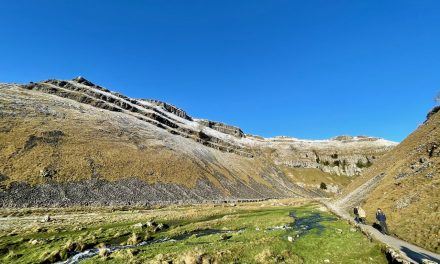 Best Places To Hike In The UK