Last Visited: 11/03/2012
Length (km): approx. 20.5 km (according to MapMyHike.com)
Time (hrs/min): 6 hours
Grade: Moderate
Return / Circuit / One-Way / Partial Circuit: Partial Circuit
Region: North-East Victoria
Park: Alpine National Park
Closest Town: Mount Beauty
Maximum Elevation: 1,986 m
Total Ascent: approx. 1,324 m (according to MapMyHike.com)
Car Access: From Mount Beauty, head back towards Wodonga on the Kiewa Valley Highway for approximately 6 km and turn right into Ryders Lane / Mountain Creek Road. Follow this for another 10.6 km to park at Mountain Creek picnic and camping area, where the walk starts heading east on Mountain Creek Track.
Map: I’d recommend purchasing Spatial Vision’s Bogong Alpine Area – Outdoor Recreation Guide (1:50,000) before setting off on your walk. If you take part in any future Conquestathon, you will be provided with a map and navigation assistance by volunteers. If you’re happy to use your phone as your map you can download the free Avenza Maps app (on Android, iPhone, or Windows) and purchase Spatial Vision’s map for AUD$17.99.

Well at least that’s what I initially thought to myself when I received an e-mail about the Mount Bogong Conquestathon, which was to be held the day after my birthday. Eventually though, I decided that the Conquestathon was the perfect excuse to hike Mount Bogong for the first time. Not to mention a much healthier way to spend my birthday weekend than the usual drunken antics.

I was happy to be supporting such a great community event and, since it can be hard to round-up mates to hike with me (especially when the hike is so far from Melbourne), I was glad that I wouldn’t be hiking alone. Over 150 people took part in this year’s Conquestathon, so there was no shortage of people to talk to.

So the night of my birthday didn’t turn out to be much of a party. I treated myself to a hotel room in Mount Beauty and worked on the blog for a few hours before I hit the sack. I must be getting old! Having said that, I was extremely glad of my quiet night the next day, when 3 km into the circuit, I started to ascend Staircase Spur.

Over around 5 kilometres, Staircase Spur increases in altitude by just over 1,300 metres, to the summit of Mount Bogong. Hungover or not, that makes for a tough climb. The spur is named as such because it isn’t all steep, and does actually level out in some sections. This is possibly the only reason I made it beyond the first kilometre. The ascent of Staircase Spur begins

By the time I reached Bivouac Hut, with my legs burning and beginning to turn to jelly, I was extremely glad to hear one of the volunteers say that we had passed the steepest section of the spur. With this in mind, the rest of the climb would be much less trying.

While I was resting briefly at Bivouac Hut, panting and drenched in sweat, a trail runner appeared and was ticked off at the checkpoint. He didn’t even seem out of breath, and had barely broken a sweat. I had guessed who he was before I heard a whisper from the one of the other hikers resting near me… “That’s Andy Kromar.” Andy is a local DSE-employee, who holds the Conquestathon record for running the circuit in 1 hour and 51 minutes. I watched in silent reverence as he continued on his way. Nutter.

Though the remainder of the trail to the summit was a little easier, I found myself stopping more often than I had previously been. The vegetation thinned out as the tree-line approached, and the views made that burning sensation in my legs (and in my ex-smoker’s lungs) all the more worthwhile. Once beyond the tree-line, I could barely walk for a couple of minutes without stopping to turn around and take in my surroundings. On a perfect day you can see as far as Mount Kosciuszko from Mount Bogong’s summit. This day wasn’t quite so clear, but the views were still enough to take your breath away (had the climb not already done so).

Above the tree-line – The summit approaches.

Following the snow-poles and the fairly well-worn track, I soon found myself at a track junction (at pole 1278), and continued a few hundred metres west to the summit cairn. As would be expected, this is where most hikers had chosen to take a break and have their lunch, and it was impossible to get a photo of the cairn without a whole bunch of people in it. Some thick cloud had also started to roll in, so I took a few quick photos and headed back east to continue the circuit.

About 600 metres from the summit is where the track intersects with Eskdale Spur. I didn’t have to use my brain here, since volunteers were waiting to point it out to me, but on any other day you’ll need to keep an eye out for a snow-pole on your left (no track can be seen at this point). This marks the beginning of the descent route. This is probably the most stunning section of the walk. I found myself constantly torn between looking at the views and watching where I was putting my feet. Taking your time here is advisable as the spur is very steep.

Unfortunately by this stage my legs had completely turned to jelly and I was barely able to control them at all. Once I was back below the tree-line and the best of the scenery was behind me, my descent was much quicker than I would have liked. One fellow hiker commented that I should be taking my time and enjoying the walk, but it wasn’t that I was in a hurry. A mixture of jelly legs, gravity and the steep spur was leaving me no choice.

I was very glad to see an intersection with a 4WD track at Camp Creek Gap, as this marks the end of the of the steepest section of descent. From here I enjoyed heading west through an attractive ferny gully (for about 600 metres), before again coming to the 4WD track. This track leads all the way back to the Mountain Creek picnic and camping area. This section is a little dull, but flat walking was just fine with me at this stage of the day. The remainder of the trail includes a few river crossings, where I had no choice but to get my feet wet. This probably would not have been the case, had north-east Victoria not experienced so much rain in recent weeks. The end of the walk was a happy sight for this unfit hiker, but as is always the case, the sense of achievement was not to be scoffed at. The all-to-familiar feeling of burning legs, which generally stays with me for a few days, is always a satisfying reminder of what I’ve achieved. On my return, Lions Club volunteers congratulated me and offered fruit and bottled water. I was also presented with a nice medallion. I can’t say I’ve ever had that at the end of a hike before. A big thanks goes to the Upper Kiewa Valley Lions Club.

This was one of the nicest hikes I’ve done in Victoria. I’ll definitely make an effort to go back when there’s a few less people around. For anyone who isn’t confident enough to set off hiking in alpine areas without assistance, The Mount Bogong Conquestathon is the perfect introduction. The only other way to see this area would be with a tour group, which would cost an arm and a leg. The entrance fee charged by the Lions Club is a very small price to pay. Even if you’re an experienced hiker, there’s no reason you shouldn’t take part in this excellent community event.

Mount Bogong (taken from across the Kiewa Valley)

Have you ever visited Mount Bogong or taken part in the Conquestathon? If you have any stories, updates or corrections, please let us know by commenting below. 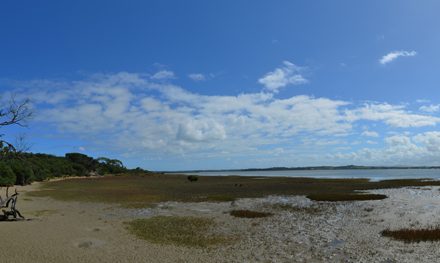 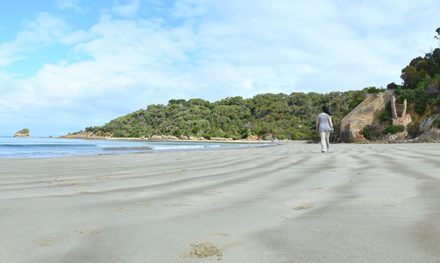