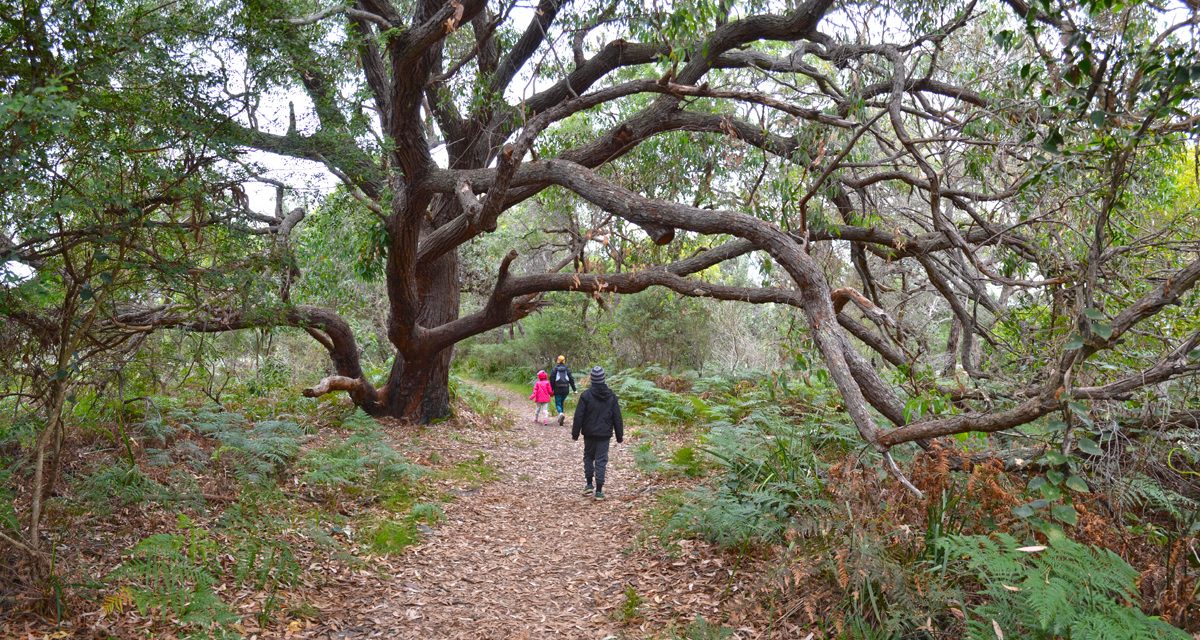 We all stop walking and she points out the whales frolicking in the bay below. We’re too far away to tell if they’re Southern Right Whales or Humpbacks, the two most common species seen migrating along New South Wales coastline at this time of year, but whatever they are they seem to be having a ‘whale of a time’ (see what I did there?). They’re putting on quite the show for us.

This is one of the precious and rare moments when the kids are both completely speechless. The four of us just silently watch, mouths wide open in disbelief at our luck.

“If we didn’t need to keep moving I could sit here and watch all day,” I say.

We’re on the 1.5-kilometre Banksia Walk, which traverses the cliff tops at Burrewarra Point, overlooking Guerilla Bay and Broulee Bay, between the coastal towns of Batemans Bay and Moruya.

The narrow trail is spectacular not just for its coastal views but for the Banksia trees, some of which are the biggest I’ve ever seen. We’ve obviously come at the right time because the whales are an incredible added bonus. 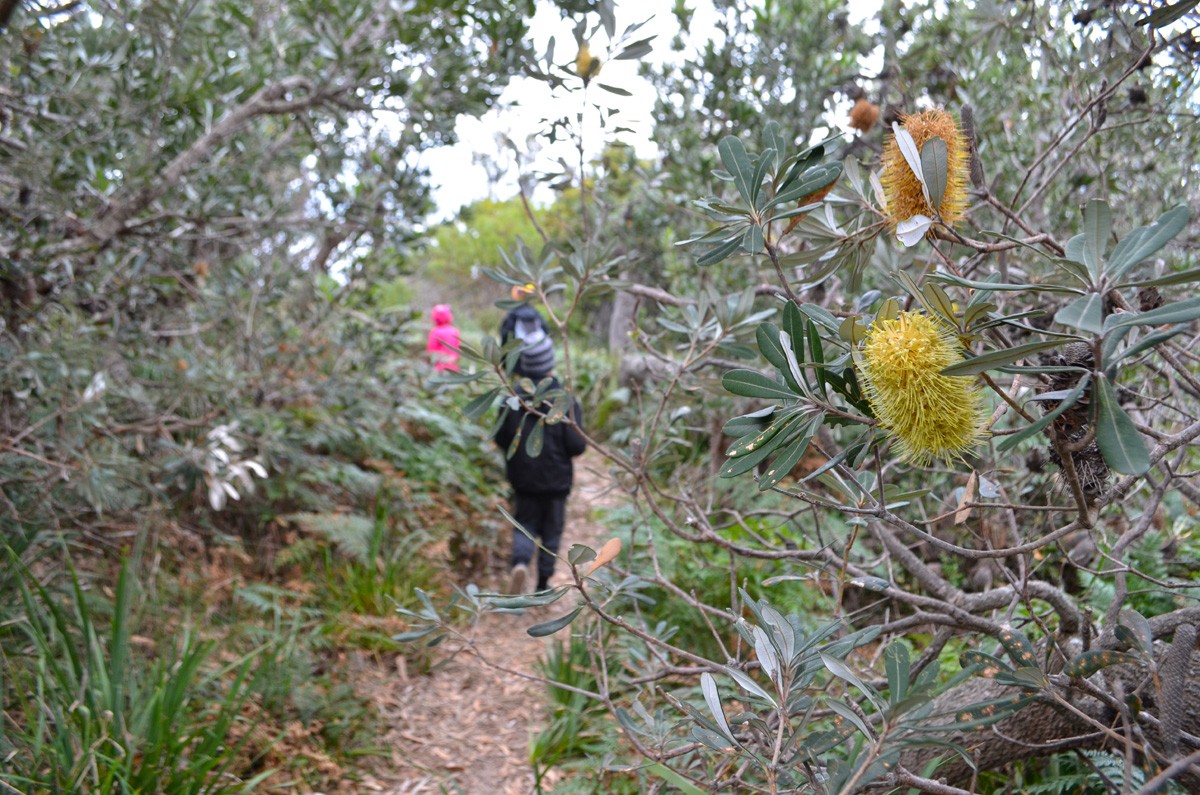 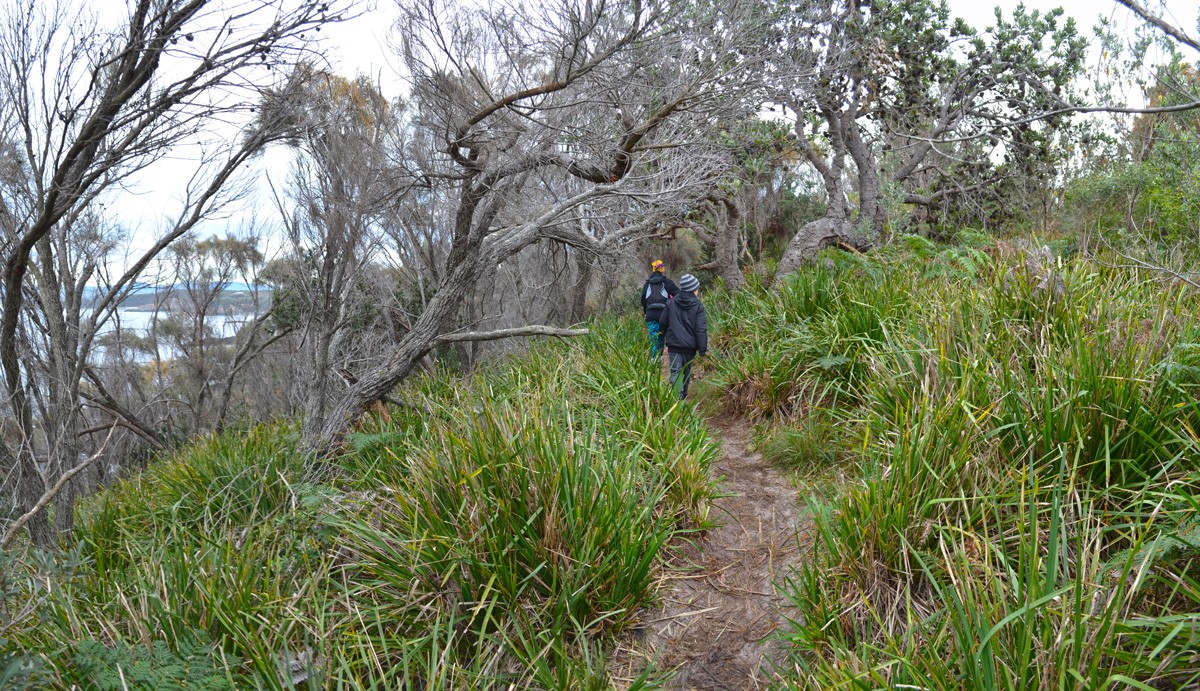 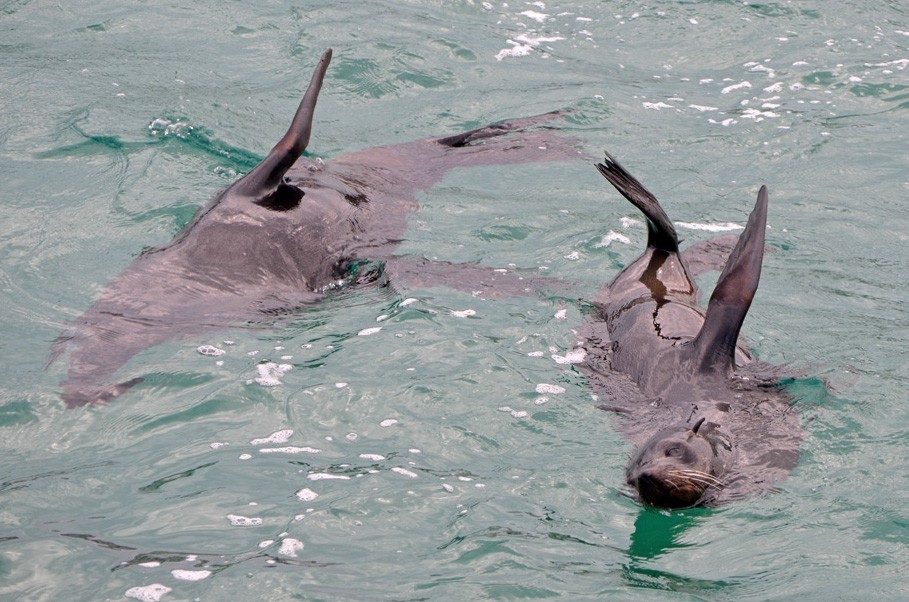 We’re en route to Narooma to meet our boat for a tour of Montague Island when we get the call we’d been dreading. It’s Chris from Island Charters Narooma, telling us that it doesn’t look like the weather is playing nice. The boat trip is off.

“We’re really sorry, mate. It’ll be choppy, though, and you really don’t want to be stuck on the island when the downpour comes.”

“It’s all good, thanks, Chris. The kids will probably get seasick anyway,” I reassure him.

“Since you’re on your way to Narooma, you should go check out the seals at Bar Rock,” he adds. “And just feel free to give me a buzz if you’re looking for anything else to do. More than happy to help.”

We’re not surprised the tour’s been cancelled since Chris warned us last night that the weather wasn’t looking great. The seals at Bar Rock sound like a pretty great alternative, though. They were half the reason we were excited about the Montague Island trip anyway.

Montague Island (not far from Narooma) is home to colonies of both Australian and New Zealand Fur Seals; the same seals that stop by Narooma for a rest and a play, presumably on their way out for a feed (or on the way back). Apparently, their presence at Bar Rock has become increasingly common in recent years, so your chance of a close up look seems pretty good.

With no idea of exactly where the seals are, we start at the Bar Rock Lookout. It’s a pretty spot with views across the headlands, but there’s no sign of seals. It’d be a great spot for whale watching, but we’re not lucky enough to spot any here. I’ve heard you can also see dolphins playing in the waves from here if you’re lucky.

We trundle down the stairs to the famous Australia Rock – a rock with a hole in it that (very roughly) resembles the outline of Australia – and the kids have a great time exploring its surrounding rock pools and running back and forth to avoid the crashing waves. 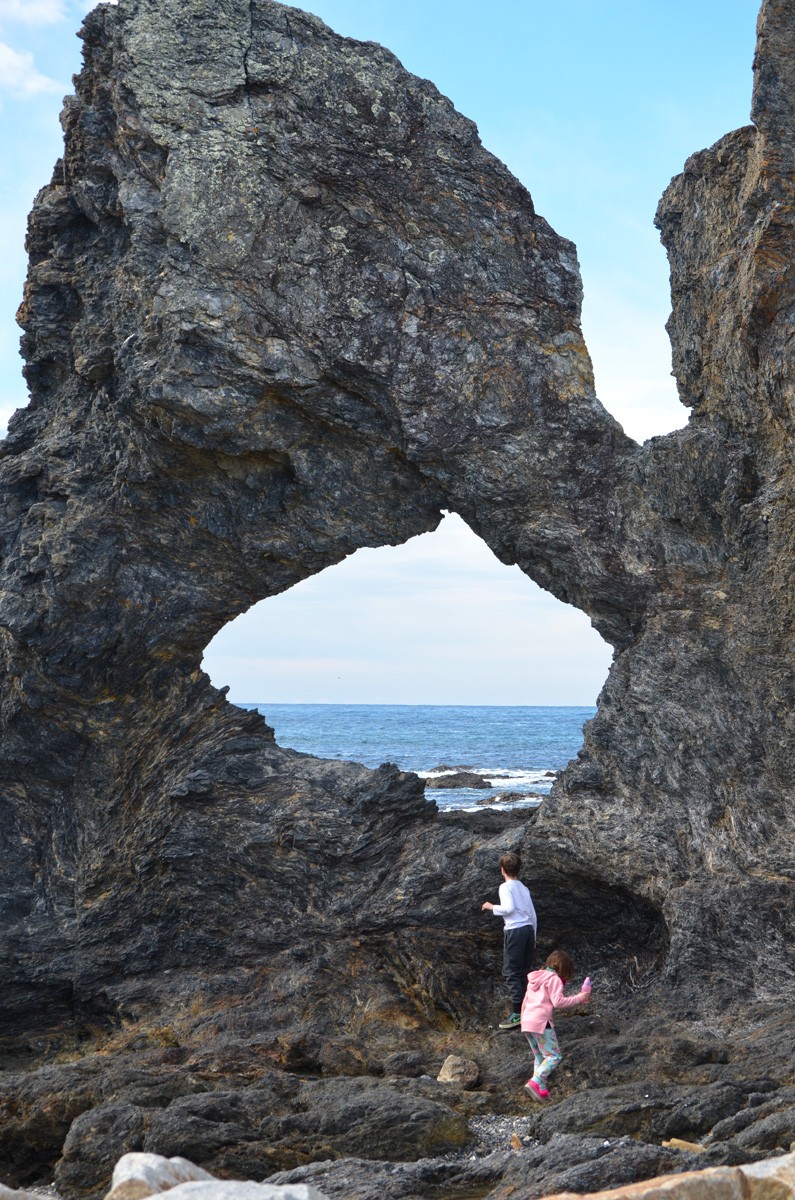 Then we overhear someone nearby mention seals on the breakwater. We clarify and they tell us there are heaps, so we head out for a look. Within 50 metres, we spot a bunch of what seem to be very young seals swimming about, waving their fins in the air. Show offs.

Not much further on, we see the mother seal (I assume) watching over them and occasionally staring at us and giving a bit of a warning moan or grunt to say “stay away from my babies”.

“They really are just ocean dogs, aren’t they?” I remark.

We walk on and spot a few more seals. One is even lying on his back, arms crossed, bathing in the sunshine and having a siesta.

“Neil, the seals are laaaazy,” The Fairy Princess complains. 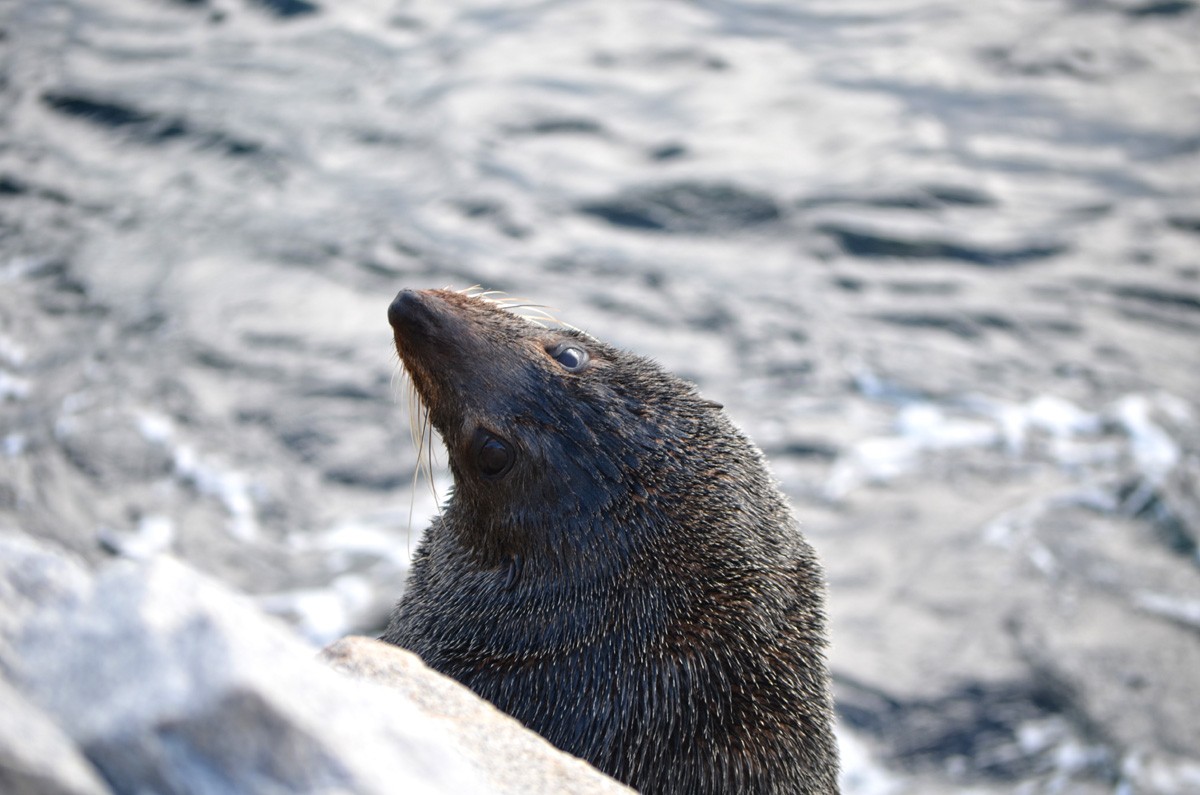 You will be able to get very close to the seals at Bar Rock, but please ensure that you stay a safe distance from them. This isn’t just to avoid stressing out the seals but also for your own safety. They might be cute, but they have been known to lunge at humans and they have very sharp teeth.

Directions: Turn north off the Princes Highway in Narooma onto Narooma Crescent. Turn right at the T-intersection onto Bluewater Drive and then immediately left on Bar Rock Road. At the end of Bar Rock Road, you can veer left to park near Australia Rock or continue straight to park in the carpark at Bar Rock Lookout.

“I guess because the land connecting it isn’t technically land,” she suggests. “It’s a sandbar.”

We stroll down on to the beach and make our way across the sandbar. Soon we spot someone standing high up on the island, looking out to sea.

“I wanna go up there!” The Chop yells.

As we get closer to the island, we spot a couple of goat tracks that head into the bush. Keen to embrace his sense of adventure, we start up each of them to see where they go but they quickly get too steep and scrubby to be dragging the kids up there. Eventually, we decide to give up and revert to the original plan of circumnavigating the island.

Returning to the beach, we start heading across the rock platform on the island’s south side and as we start to rock-hop we realise this will be slow going.

“It’s alright,” I reassure everyone. “We’ll still be home way before sunset.”

Before long we find some of the most stunning rock pools, so we take our time while the kids explore and yell excitedly about every sea creature they stumble across. With the kids distracted, we enjoy nice chats and admire the abundant birdlife and the forest thick with Coastal Banksias, Wattles and Lilli Pilli.

We reach the sandbar again much quicker than expected and find a track back across to the beach we started on. The walk might have seemed quick but we’re exhausted and hungry. We’re glad when we get to the car and are headed back to Batemans Bay for dinner.

Length: 4 km
Time: 2 hrs 30 min
Grade: Easy – Moderate / Grade 4 (according to the Australian Walking Track Grading System).
Style: Partial Circuit
Region: New South Wales
Closest Town: Moruya (13 km)
Car Access: Head north from Moruya on the Princes Highway for about 9.5 km, turning right onto Broulee Road. Continue for about 4.5 km before turning right onto Heath Street. After a short distance, turn right onto Harbour Drive and park at the end.
Map: No map necessary.
Path Taken: Follow the walking track at the end of Harbour Drive, turning left onto the beach to cross the permanent sandbar to the island. When you reach the island follow it around to the south side and circumnavigate it. Once you’re all the way around you’ll reach a sandy track on your left. Follow this to meet your original path and retrace your steps to the car.

The Montague Island tour with Island Charters Narooma looks like being good value. Based on my interactions with Chris, I’d have no issues with recommending them even though our tour was cancelled due to weather. Montague Island is home to Australian and New Zealand fur seals, penguins, turtles, dolphins and a range of bird species. This 4-hour tour allows you to observe from your boat and then take a walk around the island with a knowledgeable guide. An afternoon tea is provided.

If you’re looking for a hike down Narooma way, you could also hike the Bingi Dreaming Track (13.5 km / 4 – 6 hours, requires a car shuffle or double the time/distance for the return trip). There’s also Mount Gulaga summit walk (12.5 km / 6 hours return).

We’ve never felt quite so welcome in a cafe as we did here. The owner is the most friendly guy and the other staff are absolutely lovely, too. We stopped off on both mornings of our stay for a quick and easy round of coffees and bacon sandwiches (a bacon and double egg sandwich for me) and we got the yummiest food and coffee imaginable, with a side of incredibly good service. If you don’t believe us, check out their TripAdvisor reviews. Espresso Yourself is at Shop 23, Village Centre, Perry St, Batemans Bay.

Innes Boatshed is right on the water in the main street of Batemans Bay and has an outdoor eating area where you can enjoy a meal overlooking the water and watching the pelicans. The chips and calamari were pretty good. I ordered a piece of flake, which you could tell was lovely and fresh but unfortunately, everything came out a bit too oily. If they can do something about that, they’d get a rave review from me. In the mean time, maybe order your fish grilled.

Narooma Icecreamery & Cafe rates well on TripAdvisor and was certainly very popular. Lori & the kids were very happy with their pancakes but I was very disappointed with my baked beans. Staff were friendly and prices were reasonable.

Sam’s Pizzeria was a highlight of our stay in Batemans Bay. We loved it so much we had our dinner there two nights in a row. The pizzas and pastas were incredible on both nights and service was better than average. We were both regretful and grateful for deciding to order a desert calzone on our second visit. It was one of the most decadent things I’ve ever consumed but none of us really needed it. 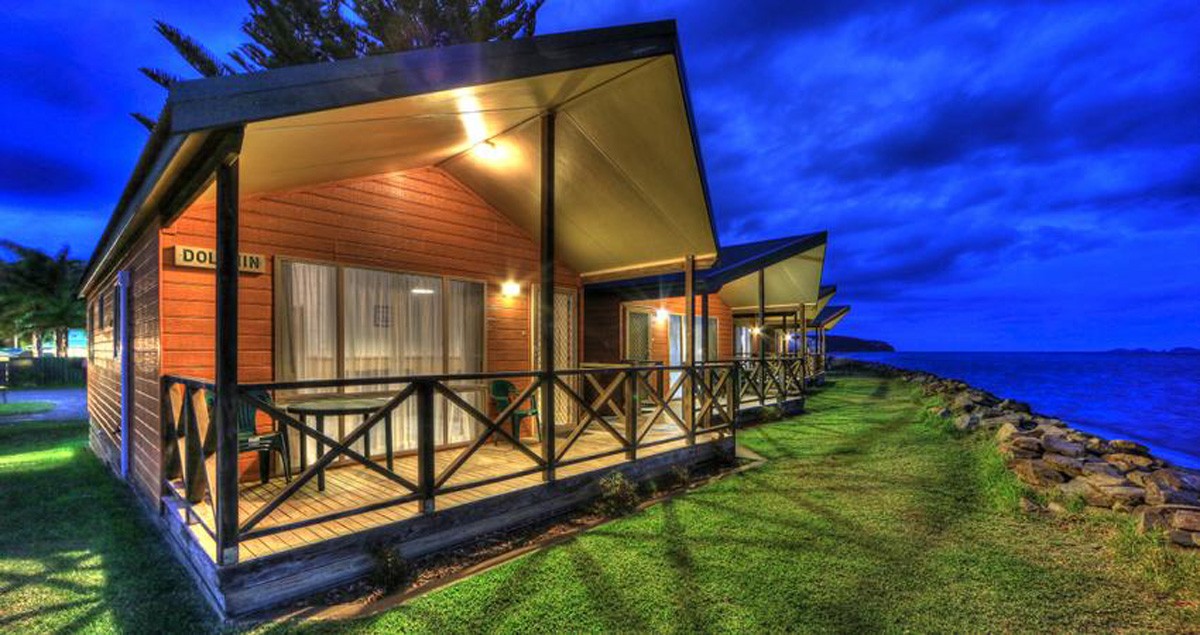 When we finally get the kids to bed after about 10 hours of driving from Melbourne, we retreat to the front porch with a beer. Our porch is about three meters from the bank of the Clyde River, on the east side, facing the main street of Batemans Bay, so we sit staring across the water at the twinkling lights of the town.

We keep watching and sure enough, there are two seals popping their heads out of the freezing cold waters, as if to welcome us. I can’t think of any better way to start our Eurobodalla adventure. The seals only stay for a while, but it’s hard to turn in for the night with a view like this anyway. We chat on the front porch until the winter cold drives us inside to bed.

The kids wake up well before the sun and inevitably wake me up with them, but rather than being cranky about it I get up and ask them to join me outside for sunrise. Only The Fairy Princess is keen, but the two of us have a great time watching the sun paint the sky with every colour conceivable and experimenting with my camera to get a good shot. We do the same on our second morning here.

There’s a lot to love about Easts Holiday Park Batemans Bay but the sunrise is my favourite thing about the place. 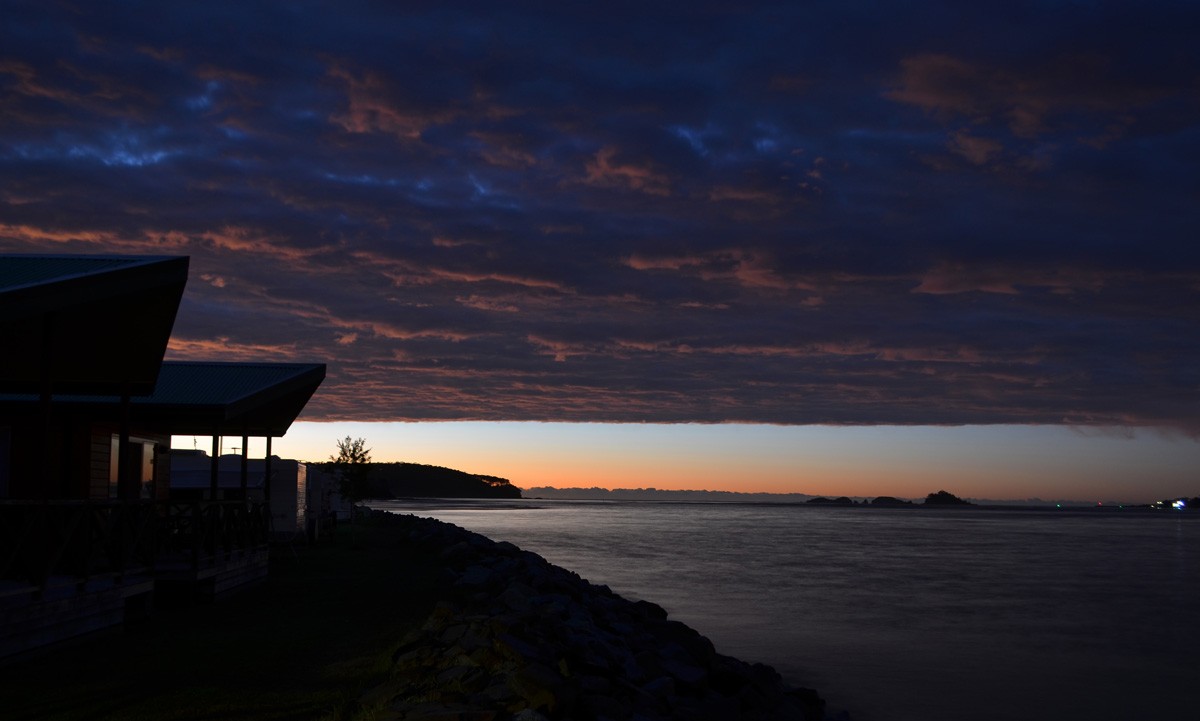 We stayed in a Waterfront Deluxe Cabin at Easts Holiday Park Batemans Bay. I’ve already mentioned the best feature, the waterfront porch, but it’s also equipped with two bedrooms (a rare luxury for our family holidays), one with 4 single (bunk) beds and another with a queen-sized bed. There’s a fully self-contained kitchen, lounge room and dining area. The master bedroom has a TV and the living area has a TV and DVD player. The décor is what you’d expect from a cabin in a holiday park but the location is five star.

We were guests of Eurobodalla Tourism on this trip. This has no influence over the opinions presented here.

Have you been to Batemans Bay or the Eurobodalla region? Got any questions, comments, updates or corrections? Let us know by commenting below. 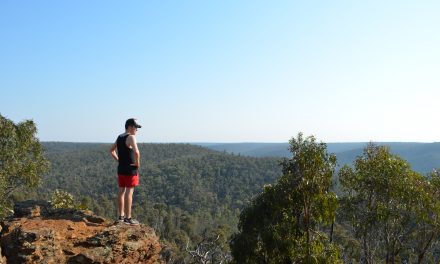 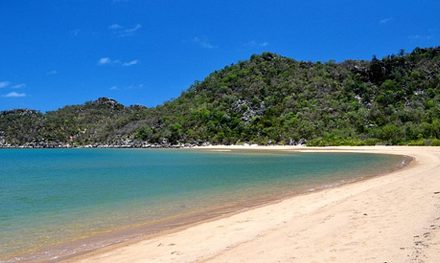 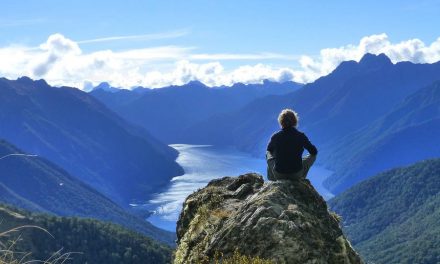 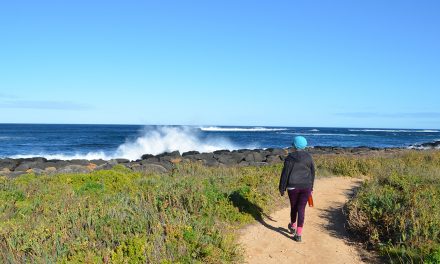