Since starting my PLB-hire service in November 2011, I’ve watched excitedly as my two PLB’s have travelled much further than I (unfortunately) have. They’ve been to every corner of Victoria and New South Wales, as far north as the Jatbula Trail, and all the way down to the wild South Coast Track in Tassie (not to mention many other places in between). I’ve loved connecting with the adventurers who’ve hired them, and loved hearing their stories even more.

Recently, one of the aforementioned adventurers – Louise Bloxham, a fellow Melburnian – was nice enough to e-mail me an enthralling and detailed account of her adventure. I enjoyed it so much that I had to ask her if I could share it with Bushwalking Blog readers (she said yes, obviously, considering that’s what you’re about to read). I’d love to do more of this so if anyone else has hired one of my PLB’s and fancies themselves a good yarn spinner, please don’t hesitate to drop me a line.

NOTE: The title is not intended to imply that the trip could not have been undertaken without an emergency beacon. Hikers should rely solely their own survival skill when planning their trip. A PLB is for use only in worst case scenario, and should not have any influence on the decision to go ahead with an outdoor adventure. 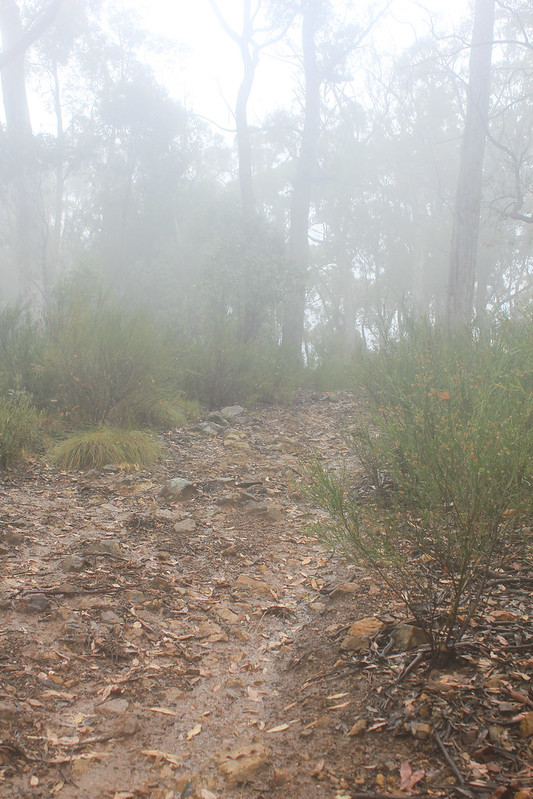 Starting out. Up all the way.

I made it back in one piece, albeit a little bruised, blistered and buggered (but not beaconed).

It was a great, but somewhat challenging walk. Basically up all day Saturday, and down most of Sunday. The last 10 km were a relatively easy stroll along the beautiful Howqua river, except I was too knackered to enjoy it as much as I might normally. The day before, while travelling only about 12 km, I gained over 1100 metres in height, taking me 11 hours; a ripping speed of just over a km per hour.

I swim at twice that speed.

Mind you it wasn’t just the ascent that pushed my limits but the bloody overgrown path, which had me much of the time launching full body assaults on the offending shrubbery, like an ice-breaker forging a path in an Antarctic ice shelf. This also became a little disconcerting at a few times where, apart from some very rudimentary signs indicating the start of the track, there were no markers along the way. I did a fair bit of back-tracking looking for an almost non-existent path. 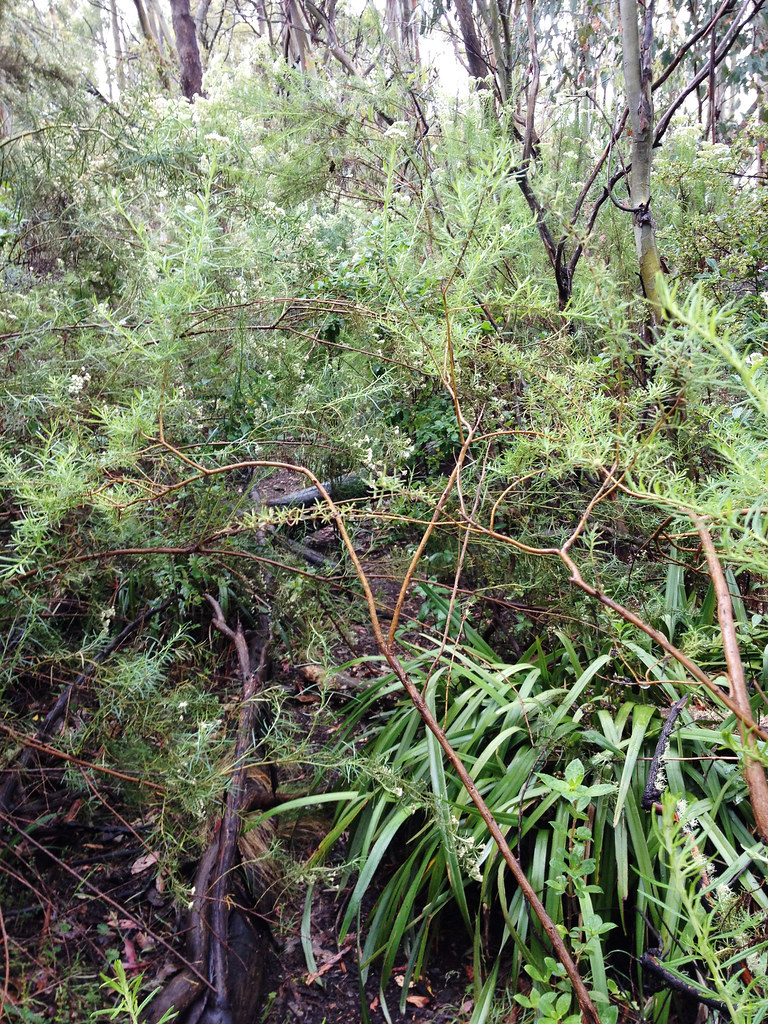 The path ahead… Yep, it’s in there.

It was at one of these times whilst scanning about an acre of beautiful alpine meadow looking for ANY sign of a way forward, that I looked down to see a Black Snake slither away from where I was just about to stomp my foot. Recovering from that near underwear-changing episode, I congratulated myself for having previously studied the map intensely, and having a pretty good idea of where I was and where I needed to go most of the time.

The biggest challenge however, snakes notwithstanding, came at the assault on the peak of The Bluff (1,724 m). My map indicated it as ‘very steep’. In my parlance I would say it ceased at this point to be ‘a walk’ and became ‘a climb’, only with no ropes, or friendly belayers to see me safely up.

I took my time but, with only about 10 more meters to ascend, reached a point of seemingly no way forward. Up looked just too hard. So I weighed my options: Go back down. Cry. Puke. All seemed a rather futile waste of time and energy, not to mention defeatist, so I took the only other option. That was take my pack off (to prevent the bastard pulling me backwards off the rock face) and proceed to throw / push / pull / drag the bloody thing up until I reached a point where I felt confident I wasn’t going to plummet to the rocks below.

I had the beacon within handy reach during this stage, but I’m not sure how effectively I would have activated it with my head smashed open like a rotten watermelon. 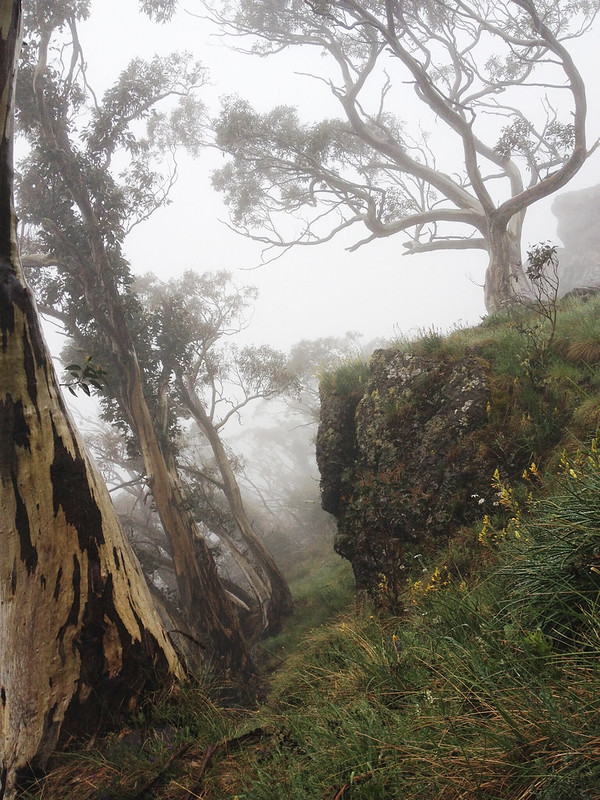 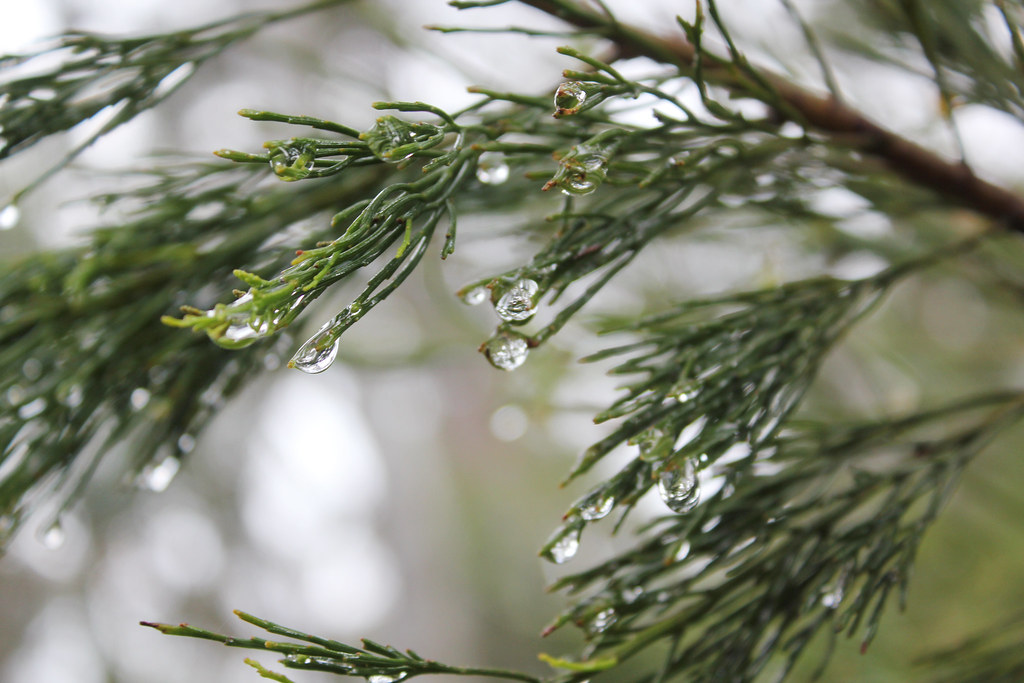 One of the offending bushes that slapped me in the face all day.

Oh, did I mention that it had been raining all day? No worries, my waterproofs held up, and the air was quite still. Until I reached the summit that is, when I realised that climbing the north side of the mountain had kept me sheltered from the fierce southerly, which now slapped me ferociously. Forget expensive dermabrasion treatments; gale-forced ice / snow crystals will do the job nicely. They sand-blasted my face to a supermodel smoothness.

My good intentions of camping up there dissipated as the near white-out conditions and aforementioned wind made the idea of finding the camping area, much less putting up a tent rather unattractive. I pushed on for another 3 km across the plateau, which was probably my favourite part of the walk. Although robbed of the supposed 360 degree views, the wild exhilaration – not to mention achievement of it – was one of those “this is why I’m alive” sort of moments. 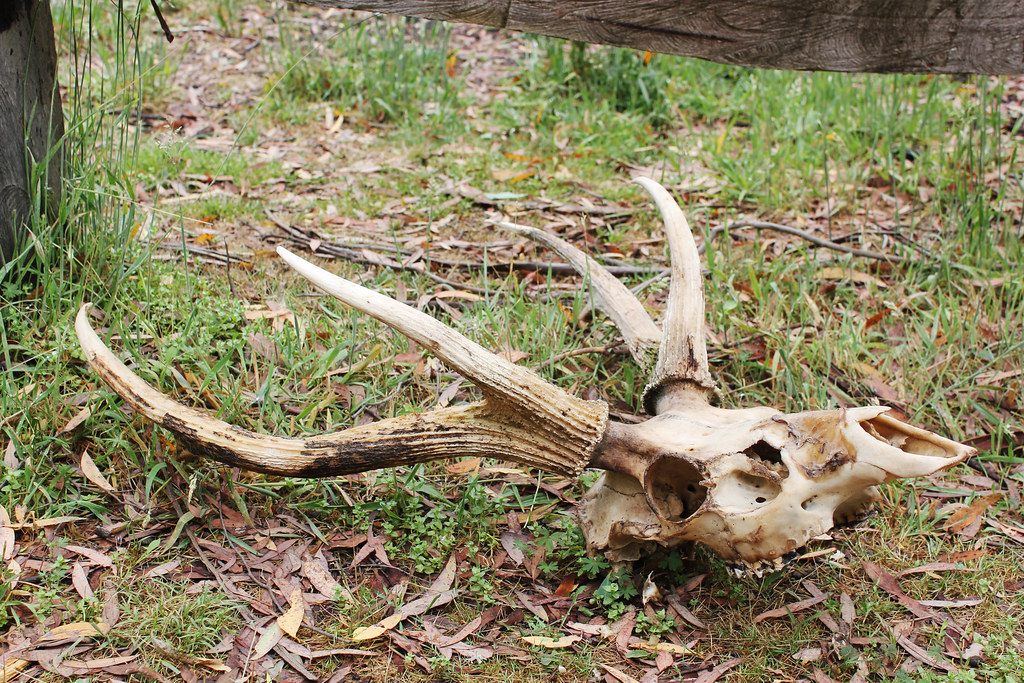 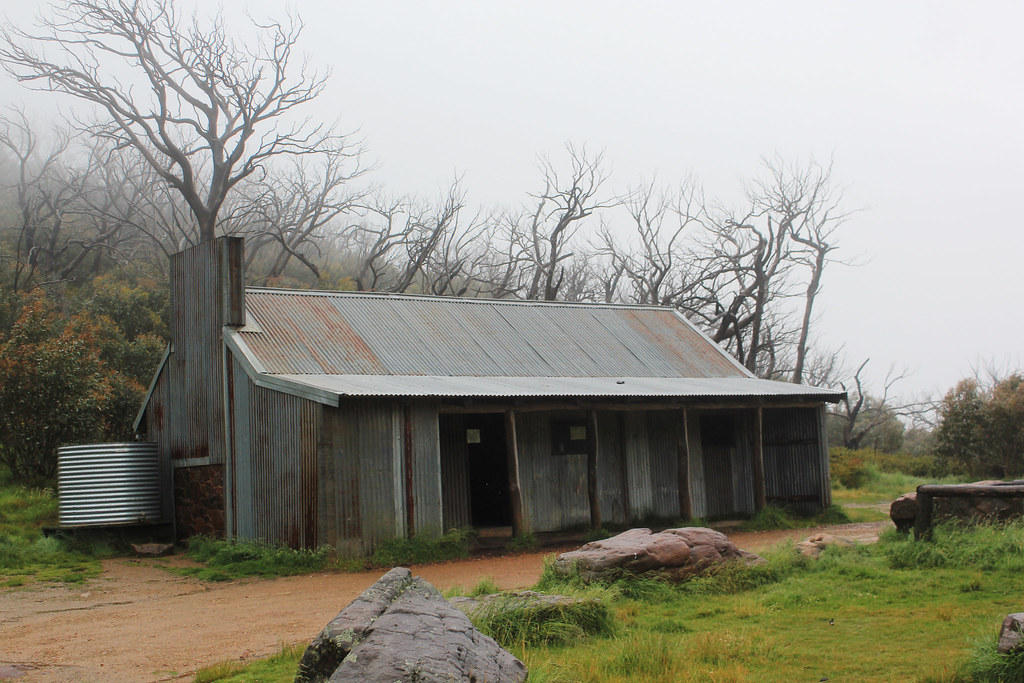 Bluff Hut, showing remnants of 20067 bushfires
(which destroyed the original hut; this one rebuilt in 2008).

I whooped like an idiot when the Bluff Hut emerged from the mist, where I found – to my great delight – the glowing embers of a fire someone had lit earlier that day, which reignited with only a gentle prod. With my sodden boots, socks and gloves gently steaming by the fire (and my body defrosting) I spent a very cosy night in the lovely hut, lulled to sleep by the roaring wind and rain outside, feeling for all the world like Heidi in her grandfather’s hut high in the Swiss Alps. If someone had brought me a bowl of fresh goat’s milk the next morning I would have been one very happy little (non-)camper.

Sunday dawned just as misty and wet, though a little calmer, and I set off back down the mountain via the 4WD track. Not my preferred manner of walking, but the alternative walking track was marked on the map as ‘badly overgrown’ and I just wasn’t in the mood for more hide-n-seek scrub bashing.

Challenges were still on the agenda, however. The very steep track started to take a toll on my knees – and then my patience – as I encountered thick, squishy clay thanks to several 4WD’s churning it up. I finally slid and slithered back down to the river, maintaining the supermodel theme – now a leggy height thanks to the considerable clay stilts attached to the bottom of my boots.

After a pleasant lunch break at Ritchie’s Hut, I wearily made it back to my car at 8 Mile Flat; a 27km circuit all up.

So I survived to tell the tale and will continue to dream up new challenges – Overland? Heysen? Bibbulmun? Larapinta? Albert Lake? Who knows? Though I’ll be sure to be in touch to avail myself of your PLB hire, again looking forward to not using it. 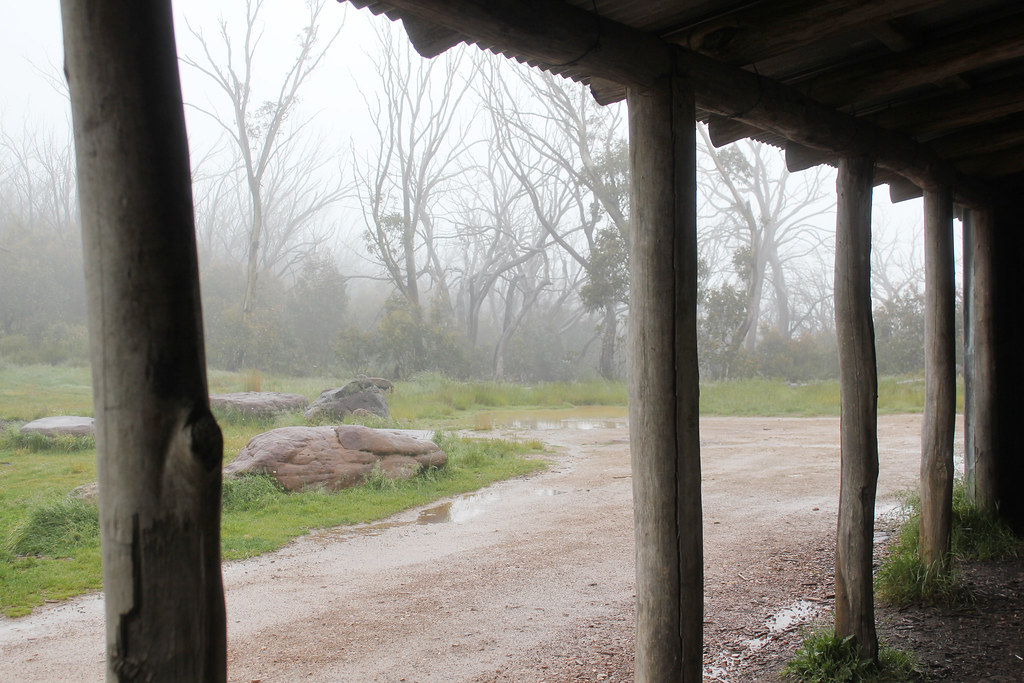 Setting out from Bluff Hut on day two. 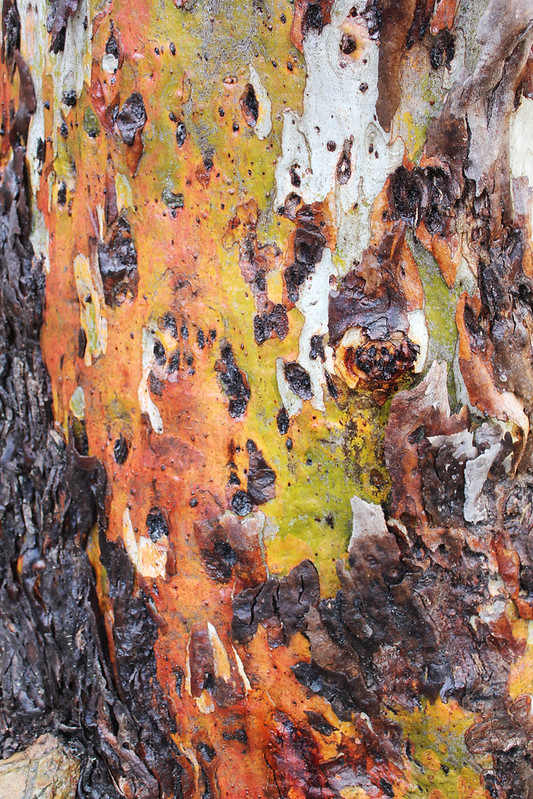 The colours of the Alpine National Park.

Have you visited The Bluff? If you have any stories, updates or corrections, please let us know by commenting below. 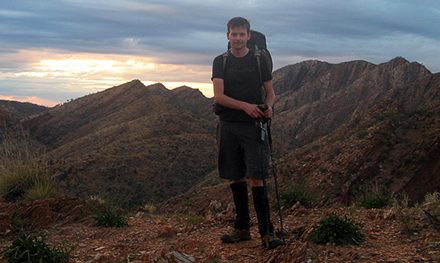 The four elements: A circuit at Deep Creek Conservation Park has all the ingredients for a great hike 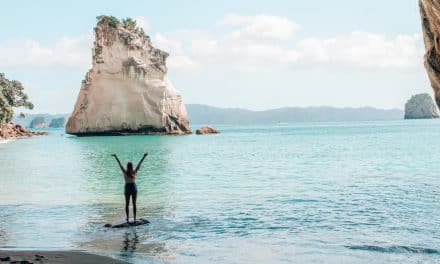 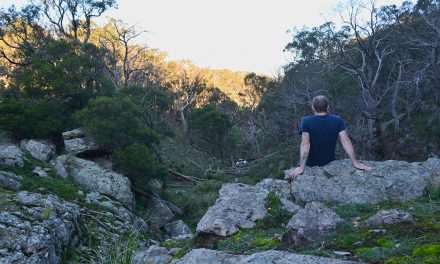